The most unusual part of making Cymatics was the fact that the music was written after the video was filmed.

In 1999 I watched a documentary on 'Synesthesia' - a disorder that effects the audio and visual functions of the brain. People with the disorder hear a sound when they see bright colors, or see a color when they hear various sounds. I don't have it (I don't think), but I have always felt that bass frequencies are red, and treble frequencies are white.

This got me thinking that it would be cool to make a music video where every time a sound plays, you see a corresponding visual element. Many years later, I saw some videos about Cymatics - the science of visualizing audio frequencies, and the idea for the video was born.

In 2013, I approached my friend Shahir Daud, a talented film director working in New York, and asked him if he was interested in collaborating on the video with me. I don't think he really knew what I was talking about, but happily he said yes, and in July 2013 we started researching the experiments and buying bits and pieces online.

First up was the Chladni Plate. This is a speaker with a metal plate attached. You pour sand on the plate, and play various tones though the speaker. The vibrations of the plate move the sand into different patterns depending on the pitch of the sounds.

We purchased one from a website for school science teachers, and operating it was fairly easy once we figured out that it should be perfectly balanced and covered with a minimum amount of sand.

After finding out what frequencies resonated the plate the best, I selected four shapes that looked good, giving me four notes to use for the musical instrument that would accompany it. Because the sand took a few milliseconds to move into the next shape, I couldn't change notes very fast, and so wrote something that stayed on each note long enough for the shape to form. Originally I wanted to use the actual audio that generated the shapes, but it was very high pitched, and kind of un-musical - so I ended up just using the notes I wanted, and mixing a recorded element of the sound of the actual plate with a simple synthesizer sound.

We scheduled the shoot for December 2013 - just in time for New York and the polar vortex to provide a blizzard for us, and although some roads were closed all the crew managed to arrive. We had a limited amount of time, just two days. Most of the first day involved setting up, with Cinematographer Timur Civan and crew rigging an enormous square soft-box light above the set, and we were ready to start shooting in the late afternoon. 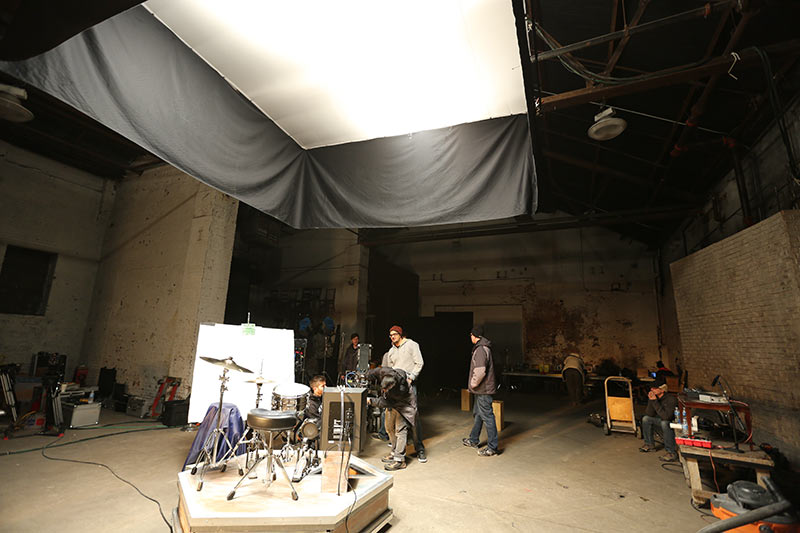 On set, the experiments were all controlled from my laptop. Most of them involved playing odd sounding tones to generate the required patterns, and often at high speed so that we could shoot slow motion. The crew no doubt wondered what the hell kind of music it was.

To control the Chladni Plate, I played back the notes as audio through an amp connected to the speaker. Before we completed the shot, the fuse blew on the speaker, killing the experiment. This had happened many times in testing but I had not brought any spare fuses with me. It was 4pm on Saturday - would a store be open that would sell the specific fuse we needed? It was New York City - of course there would! After an unscheduled pizza break we got the shot and moved on.

The next experiment was the hose pipe. Again we'd seen a few videos of this online, where people had made water appear to freeze in a sine wave shape. This is really happening but is also a camera trick - if the speaker is vibrating at the same rate as the camera's frame rate, the water will be in the same position each time a frame is taken, and will appear to freeze. A similar effect can often be seen when filming the hubcaps of a car moving at the right speed.

We attached a hose to the sub woofer and filmed a few experiments in the shower. We tried doubling the frequencies, which made very tight coils, but settled with 25 Hz, the exact same frame rate as the camera.

As we'd have the sub woofer in the shot, I felt that it would look good with something that generated low frequencies, like a kick drum. The water took time to form it's shape and dissipate, so I ended up creating a long sustained kick drum sound with a strong tone to it, and adjusting the length to match the video footage once it had been shot. 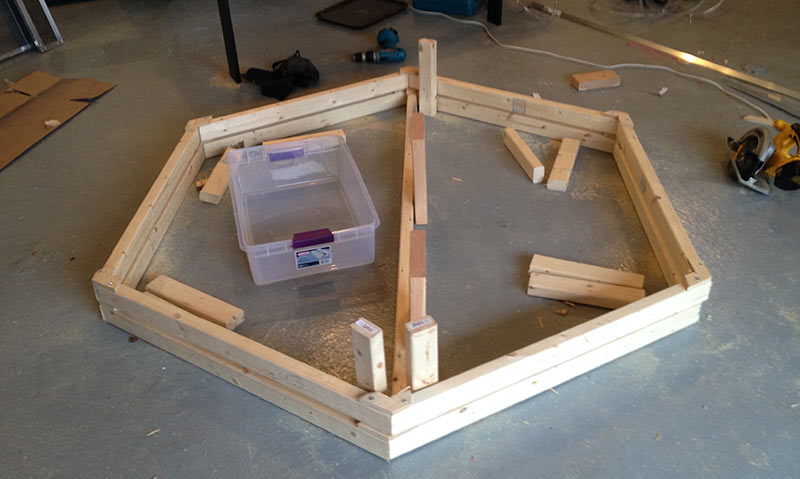 On set, the hose pipe experiment was also a bit problematic. I had built the stand for the drum kit with a plastic tray to catch the water. This was connected to another hose that ran to a drain. The main water hose worked fine, but the catcher didn't drain and the water just overflowed on to the floor. 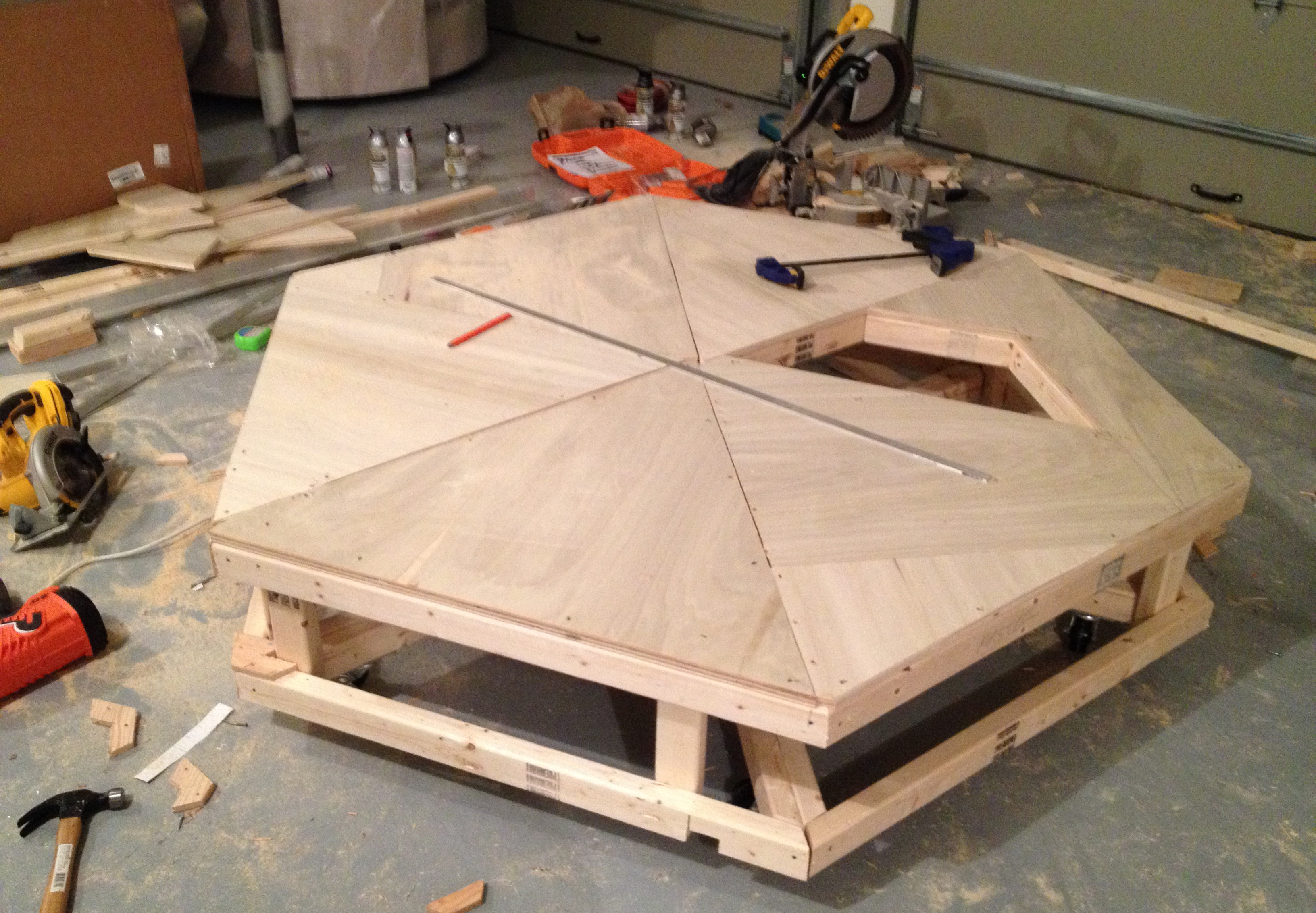 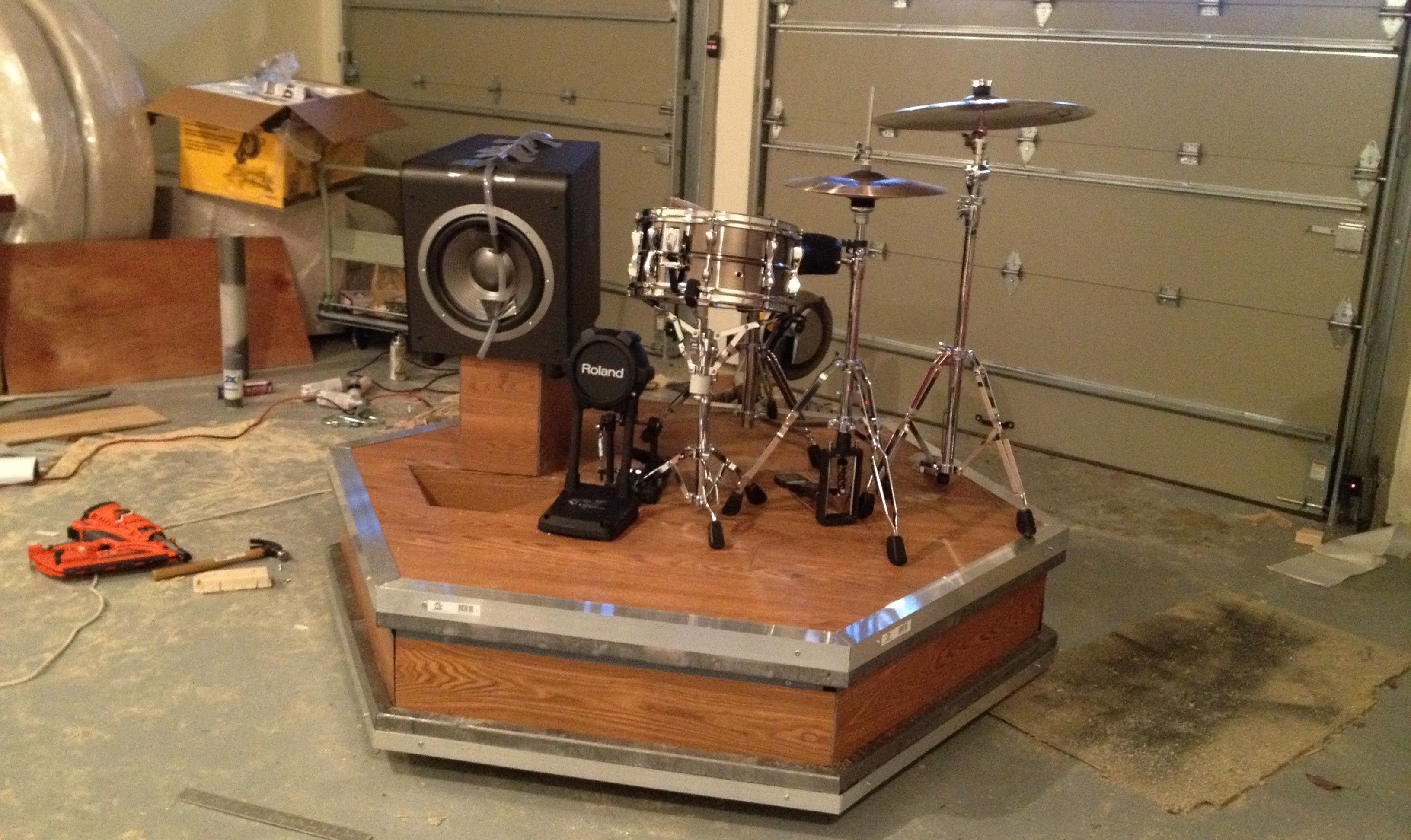 Eventually Art Director Maggie Rudder and her crew started vacuuming up the water from the tray between takes, often getting wet in the process. Not so fun in the sub-freezing temperatures! 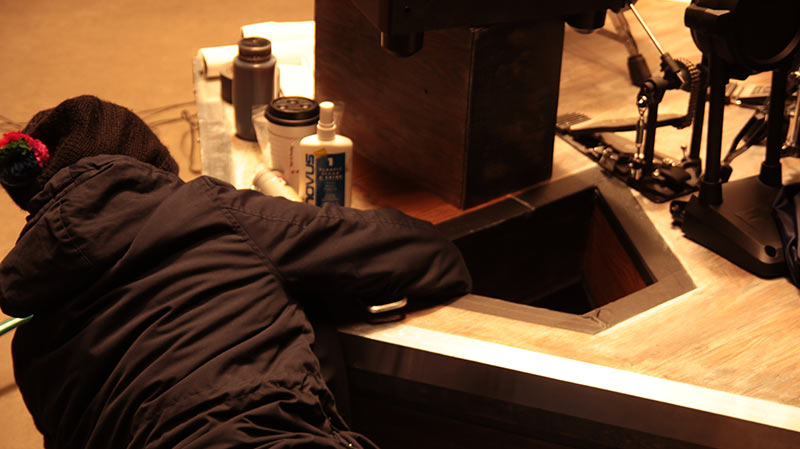 The next experiment involved a dish of liquid on top of a speaker - something we'd seen as still images on Cymatics websites, but never as a video. We thought this would be like the Chladni Plate, where the size of the dish meant we'd find a tone that resonated it perfectly, but in fact it was more like the hose pipe, where matching the camera frame rate made the liquid appear to stop moving. We tried different liquids, settling on frozen vodka because it seemed thicker. Unlike the hose pipe, doubling the frequency make a nice pattern too, and so I ended up with two useful frequencies to use, and therefore two notes. 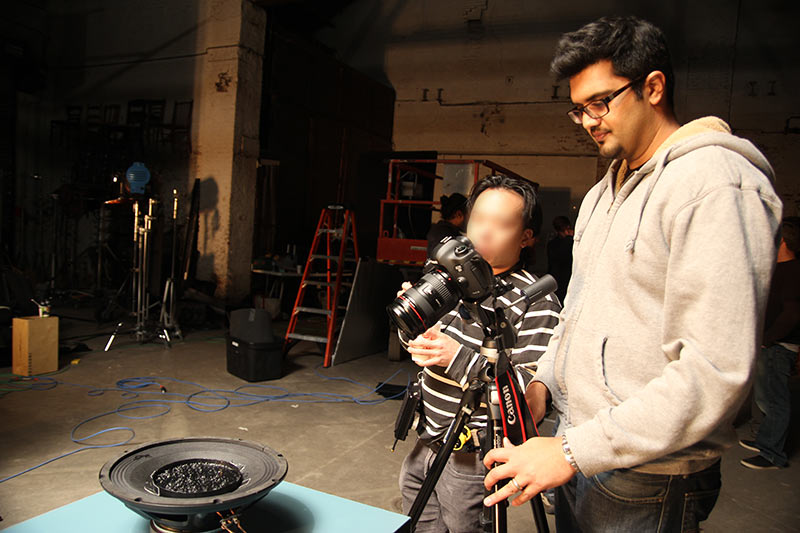 The next experiment involved ferro fluid - magnetic liquid. We'd seen some amazing image online of art projects involving ferro fluid where the liquid formed into a big spiky ball. Unfortunately, we discovered that to do this involved super high powered magnets, and the fluid also took it's sweet time to form the shape. Not very useful for us as we wanted something that would work rhythmically with the music.

Eventually we found a good balance of magnet size where a spikey shape would form fast enough for our liking, and placed magnets in a dish where you could see the ripples in the liquid once the magnet was turned off. The ripples implied that the sound should have an echo, and so this became the lead instrument in the first half of the song. 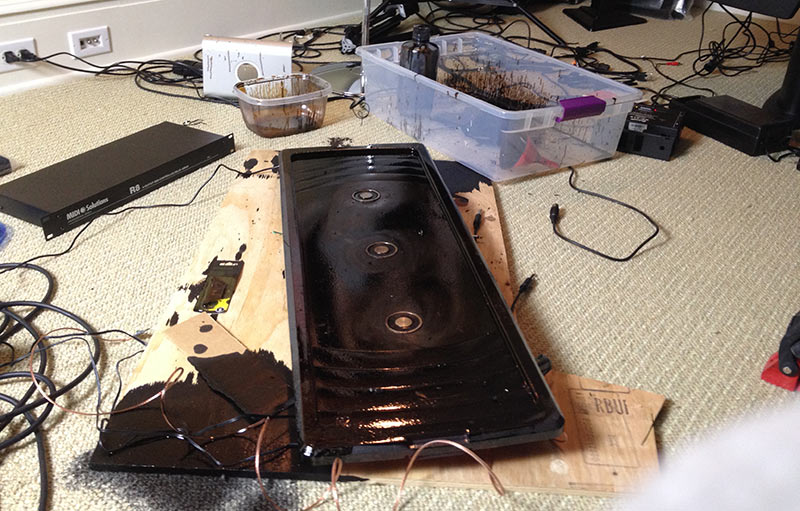 True to form, on set the ferro fluid leaked all over the floor and made a huge mess of things. 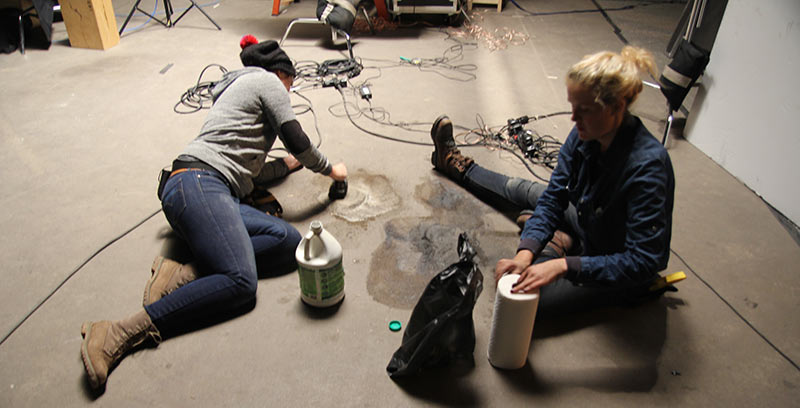 In the middle section of the song I am seen playing a Plasma Ball. We liked the idea of seeing electricity, and found a company that made an enormous one 4 ft in diameter, and in various shapes. No one could assure us that they would be able to turn on and off with accurate timing, and in the end we settled on using a $20 toy plasma ball. 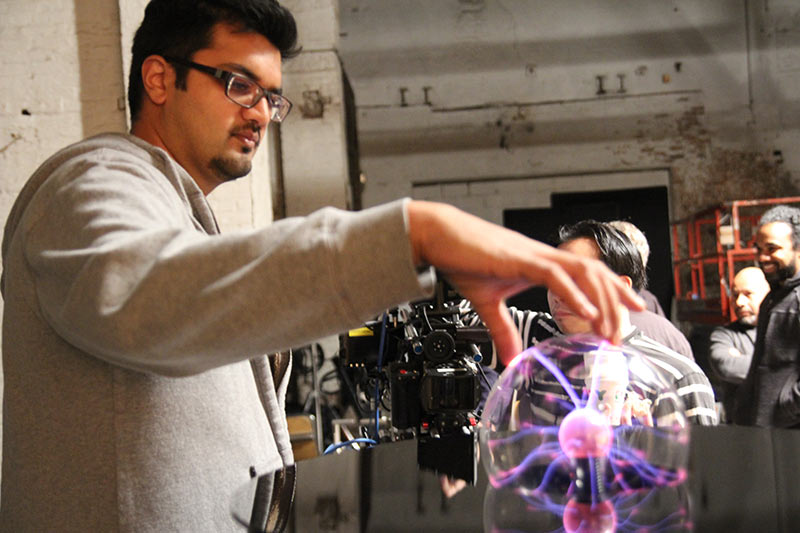 I am 'playing' it with my hand in the video by having it turn on and off with each note of the keyboard. The position of my hand is supposed to imply the amount of filter being applied to the sound. I selected a synth sound that reminded me of electricity.

Shahir came up with the idea of using a Ruben's Tube - a long pipe filled with propane. With this involving fire, we couldn't experiment with it in the apartment so I was not keen to use it, but in the end Shahir was relentless in his enthusiasm and wore me down! 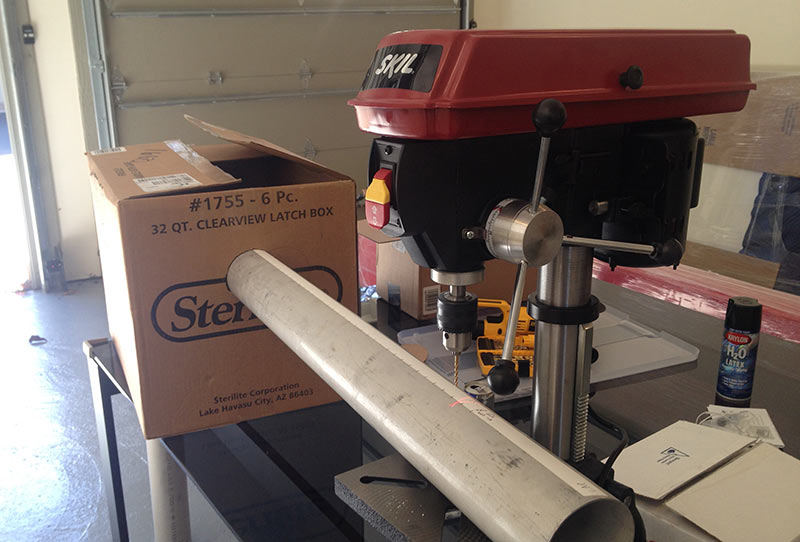 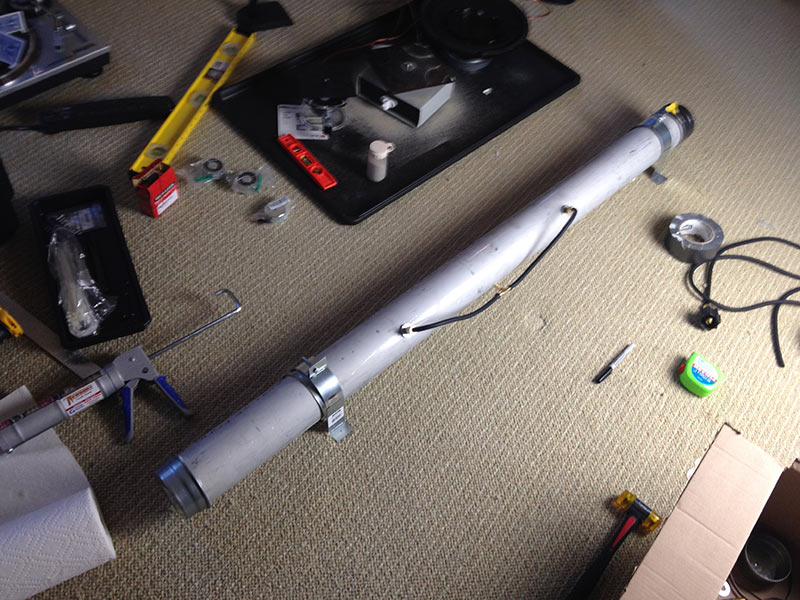 Two weeks before we were due to shoot the video, I found instructions on how to make a tube, purchased all the parts, and set to work. We were very nervous lighting it up, but everything worked perfectly. 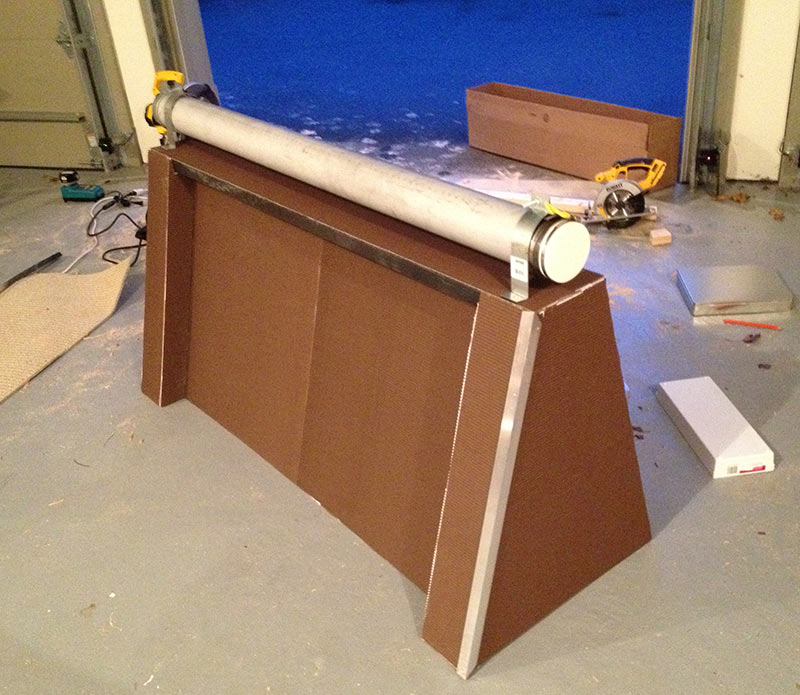 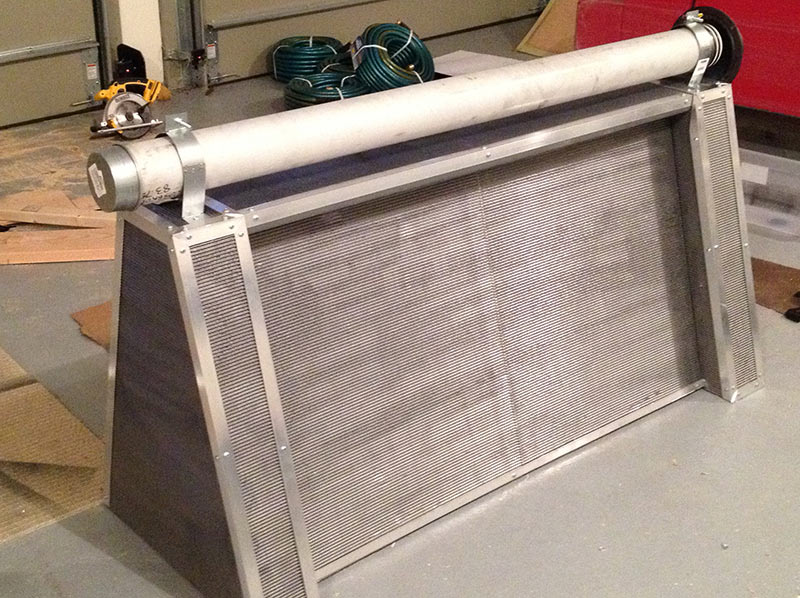 When you play tones that match the resonant frequency of the tube, it forms high and low pressure zones of gas and this effects the height of the flame. We could control the number of waves of fire that appeared, and ended up using three different tones that created three, four, and five waves of fire. The stand I built reminded Shahir of a 'Gothic Church Organ', and so I wrote a musical part using organ sounds. 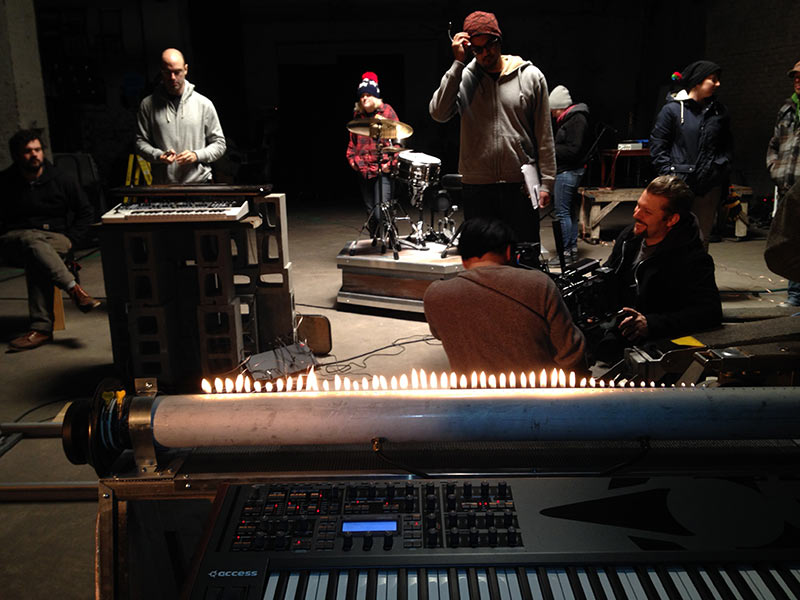 The finale of the video involved Tesla Coils - high voltage devices that generate arcs of electricity in the air. 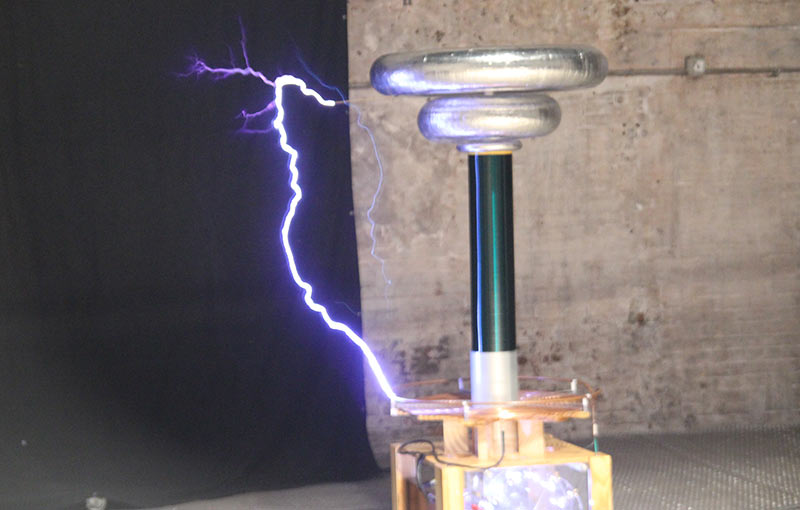 Tesla Coils generate a number of sparks per second, and you hear this as a rough distorted note. Some coils allow you to control the timing of the sparks, allowing you to control the pitch and play tunes on the coil. We liked this idea, and recorded audio of our small coil playing the music from the final section, but in the end the sound was a bit too rough, and for the music mix I reverted back to using high pitched synthesizers instead.

We found a couple of 'coilers' online who generously offered to come to our shoot and build their coil and operate it for us. We hadn't actually seen one in real life until the morning of the shoot. 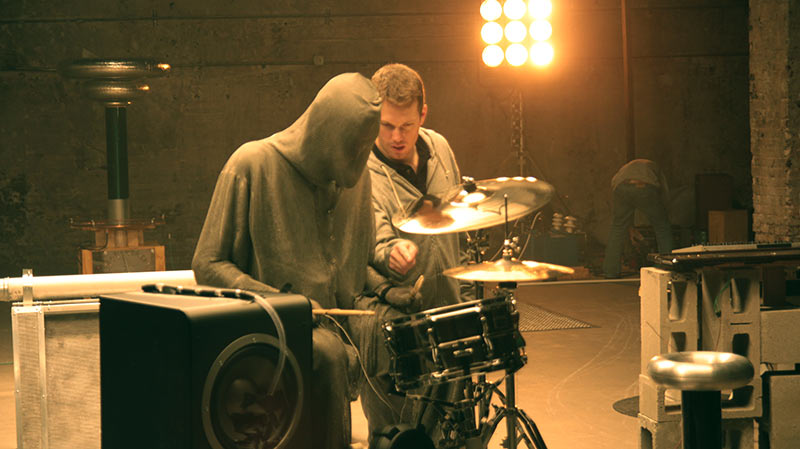 We tried wrapping wire around the drum sticks in the hope that an arc of electricity would jump from the cymbals to the sticks, but the small coil wasn't strong enough and there were only a couple of small flashes created. 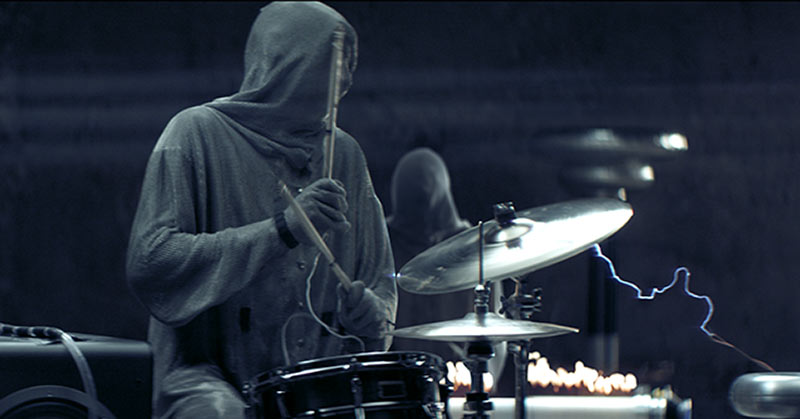 For the final shot, we wanted to have the arc form between the ground and the jumping feet of our intern slash stunt double, Mike. Luckily using the big coil, we had all the volts we needed and the arc formed perfectly. 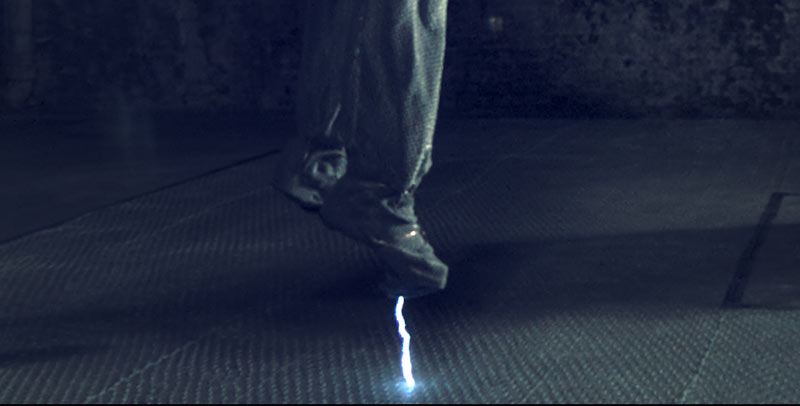 
< Back to the main page 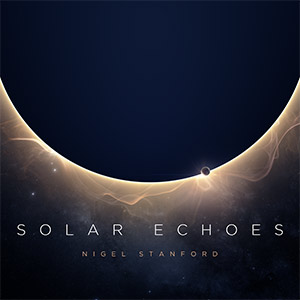